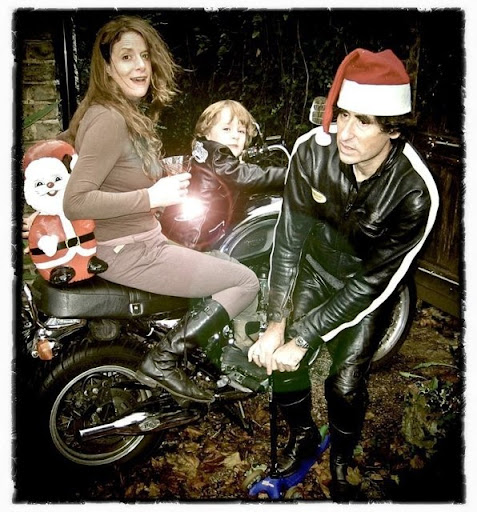 Charlie has discovered chess and is patiently allowing himself to be beaten game after game while he learns the moves.  He's already worked out the complicated Knight and is getting to grips with bishops and rooks and the omniscient Queen; he's learnt how to castle his King but he is finding pawns hard to master with their erratic manoeuvres...

I'm delighted and frankly I credit all the problem-solving games he's been playing on my phone for the past year and a half.  Every game he gets a teeny bit better and he is longing for Christmas when we will be staying in a house with a proper chess set.

All this budding chess genius talk is making no impression on the Frog who pronounced after his 5-year-old's third-ever game of chess "He's rubbish, he can't remember which piece is which!"  He also commented, more accurately that "I bet he'll have dropped it in a week" - so no pressure then.

I have an ambivalent relationship with chess.  My Dad started teaching me when I was about 6, no doubt with the same dreams of owning his own personal chess savant that I harbour.  I always wanted to be good at it but sadly the light never shone for me.

I have fond memories of visiting a very good friend who was living in Paris for a while and being taken to his local cafe where chess was played at any hour of the day by wizened Frenchmen smoking tiny, pungent roll ups.  We sat at a table and started a game and within a few moves he had me up against the wall.  As I was concentrating fanatically on at least taking his queen with me before I went down, I noticed the occupants of the cafe edging slowly towards me, muttering to each other.

Before long we were surrounded by chess players and wreathed in cigarette smoke.  The muttering got louder, they were clearly itching to help out... then, unable to stop himself a thin hand snaked down from the closest figure and gestured at a move I should make.

Hugely annoyed at the interference, I made the move and drained my wine glass in irritation.  My friend responded; again I sunk into baffled silence.  The muttering grew quickly into a loud debate about which gambit I should be taking and the whole cafe was now standing around our table.

Another move was suggested and just as my annoyance was peaking, I realised what was happening.  Letting them take over, I watched a beautiful, full-on turn-about take place... I can't remember who won or lost the game but for a few moments, the door into chess had opened and a chink of light had shone through.

Who knows if Charlie will still be playing chess by Christmas?  I don't know and I don't much care but I am certainly going to be encouraging him to do anything which takes his mind away from shooting zombies, throwing angry birds at pigs, sinking pirate ships or any of the destructive video games he's been playing.

No, it's going to be about murdering bishops, capturing queens and pillaging pawns from now on - death to the king!
Blurted by Sparx 7 comments:

There something about the way the boy looks when he's lying down that makes him seem so much older.  Standing up it's clear he's a half-pint; lying down all stretched out with his long legs and his baby face pulled back by gravity he's shockingly much more grown up than I think I thought he should be.

Anyway, so all this growing up has clearly been happening right under our noses and while we've been blithely purchasing longer trousers and bigger shoes and helping him read and write and swim and... well, all the things a growing 5 year old might do, we've somehow failed to notice.

It's just that so much has remained the same.  He still loves his trainset - in fact we're buying Brio for Christmas for the 3rd year in a row.  He still has warm milk at bedtime, he still loves Peppa Pig and busses and the Transport Museum - and he still hates to dress up.

For some inexplicable reason, we've managed to avoid the Nativity Play for the past two years - his last nursery didn't engage in anything so overtly religious; however he is now in a full on church school and has been coming home singing songs about Baby Jesus for the past two weeks.  This has culminated in a letter requesting the construction of a costume - angel or shepherd.  He's chosen shepherd (thankfully; not sure I would be very good at making wings or that he'd be good at wearing them...).

He might have chosen a shepherd's outfit, but he's not going to wear it - and we all know that.  I know it.  His Dad knows it.  His teacher knows it.  All his friends know it and he knows it - although he's not admitting to it at the moment.  So, even though we all know that this is a total fantasy, I am making the costume.  I am even making the headdress.  I may even make a shepherd's crook, who knows.

What we do know is that the outcome will be a total repeat of the last nursery play, the one from the lovely Montessori he was at for a few months, where we made a costume and packed it up and he wholly and completely failed to wear it.

In fact, I'm going to post the picture up again, because I'm 100% certain that, barring the age of the children around him, this is the picture I will take at the nativity play next week; Charlie in his normal clothes, sat tearfully on someones lap, mouthing the words to the song while all around him, pixelated children sing loudly and do all the right hand-gestures. 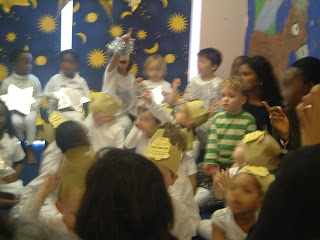 And, I will be delighted; proof that he's still actually quite a little boy... at least for a while.
Blurted by Sparx 4 comments: