I subscribe to that popular and yet cock-eyed notion that everything comes in threes. OK, so possibly not everything. Socks come in pairs (although rarely stay so), also hands sadly... legs, eyes, ears, kidneys, cards when you're looking for a full house... Many things do however come in threes: book deals in airports; household Gas-Electricity-Water bills; er... er... well troubles invariably come in threes.

It's not, when something bad happens, that I stand around waiting for the next two things, however if two bad things happen, the third is inevitably ringing at the door before the first two have decently buggered off.

How it was therefore when Charlie nearly broke his arm only days after the discovery of a (gasp) verucca (the shame...) that we failed to notice his ear infection is beyond me, but there you go; we only suffered 4 nights of no sleep thinking, er, that his arm was causing an, er, fever... yes well erm.

We are nearly all better now except for the occasional need to over-react when faced with say, getting dressed or eating one's dinner ('I CAN'T put my jammies on, my ARM hurts... please can I climb up you and flip over 20 more times instead?'). It's not without it's trials, however, this recovery business.

Today he parlayed a little twinge into a post-breakfast ice-cream cone. After lunch, I had a lie-down and apparently he used his wild powers of persuasion to con his Father out of a second ice-cream. We then went to the park and, since both of us thought 'he's only had a little one at home and he's been so brave', he conned us out of a third from the ice-cream van.

He also conned us out of a third of our income at the local fun-fair, but that's another story. I rest my case.
Blurted by Sparx 14 comments:

Heading back to mormor...

Sunday. It appears that on this blog, it is always Sunday.

It's been a weird weekend. It's been a quiet weekend; strangely unsettling. Friday we had a long day, Charlie and I. We went swimming with friends in the morning and then had a picnic lunch in a friend's back garden; relaxing, happy, idyllic, flowing from garden to house to house to garden, the kids roving in a feral mass.

Shortly after the stick from his ice-lolly was deposited in the bin, my little boy was run-down by a boy on a bicycle and has for a few days at least, lost the use of his left arm.

Before the xrays and the certainty that it wasn't broken he passed out twice and lay semi-conscious, rolling his eyes and moaning until we splinted it. In the hospital he would only talk about his bus to the doctors ("He's in his own world, that one...") and he has been sleeping 13-hours a day, so oblivion and dissociation are ruling the roost. It hasn't stopped him from consuming vast quantities of ice-cream and while we are trying very hard not to make a fuss, it's difficult as he can't really push himself up from sitting to standing and if he wants to use his hand he has to pick it up with the other hand and place it near the toys.

Every day he gets a bit better and hopefully he'll be back to mormor in a few days ("Are we back to mormor now Mummy?" as if normal can be found on a map). We're trying to act as if nothing has happened so he's not scared; but I tell you, as if I needed it underlined, bloody anything can happen to anyone in a fraction of a second.
Blurted by Sparx 21 comments:

I drift half-asleep, fuel reserve are low. I pull against the extra gravity of Sunday morning, drawn to the small, square button on the machine. I push it and slowly it begins to fire up. I've just finished loading fresh ground coffee when the alarm goes off...

MUMMEEE!!!! It's the Stout Controller, something is wrong with his bus. The cat is throwing up. I hesitate - clean up cat-sick or fix the bus? The cat starts to eat it's vomit. I opt for the bus.

Several minutes later the bus is fixed and the smell of warm coffee beans powers me back into the kitchen to press the button. The relief of seeing the coffee flow into the cup is marred only by the realisation that I have trodden in the remains of the cat's stomach contents.

Several hours later I am wrestling with my printer in the cellar as a series of birthday cards are printed, one for a party south of London. The alarm goes off...

WHAT ARE YOU DOING IN THAT CELLAR??? It's the frog, left alone too long with the Controller, he has experienced total systems failure.

We drive, him complaining, me ignoring and the bus clattering around in the hold with every turn. By the time we reach the party he is asleep and when he wakes up he no longer wants to go to the party.

We spend 30 minutes at soft play, him ignoring all his friends and clutching me dramatically. He won't play. Eventually he wanders a few feet away and plays with some balls. The alarms sound, everyone off to eat. He won't leave soft play. He won't eat. Eventuay he eats crisps. He eats a biscuit. He wins sweeties in Pass-the-Parcel. He joins in. He starts to play. The party ends.

And that, my friends, is how I find myself sitting by myself at a soft-play in Leatherhead at 5:30pm on a Sunday.

Charlie is trying valiantly at the moment to get his head around the notion of 'tomorrow' and 'yesterday', it's all very confusing.

We deliver gold stars on a month-view star-chart for good behaviour and we're really trying to use this to underline 'that was last week, that was yesterday'. It's working to an extent, although he will still tell anyone who listens that Father Christmas came 'last week' and tomorrow is always Friday.

I have this abiding memory of a beautiful Neanderthal I dated in my final high school year; I met him during a brief stint flipping burgers, he was a gorgeous Italian called 'Romano', lusted after by all the female McStaff. For some reason he chose me and we dated just long enough for me to show him off smugly at graduation in a sort of 'ugly duckling gets swan' moment. I went to pick him up from his house one day to find that he wasn't dressed, he was sitting in the livingroom in his shorts and his Mother was apologetically dressing him. He raised his arms, she put on his t-shirt, he raised a foot, she stuck it in a leg of his jeans... it was about that point that I started to go off him fairly substantially.

Anyway, one morning a few weeks ago the spud was robotically eating peanut-butter toast and watching Chuggington with the sort of glazed stare he normally reserves for doing a poo, while I was standing in an apparently sound-proofed bubble waggling a t-shirt at him. He raised his arms. I put on his t-shirt. He raised a foot...

So. Now he gets a star every time he undresses and dresses himself, one for eating dinner without our help and one for tidying his room. When all the stars are gone he's been promised 'a big present'.

it's good, the star chart, but it's not without it's difficulties. The upside is that he is now reliably dressing himself. The downside is that this involves an hour of him dancing about in various stages of undress, displaying 'Mr. Bum Bum' gleefully and crowing about each item that's been taken off or put on. If he takes too long and we intervene there are hysterics over the loss of the star. Getting out of the door at all these days is pretty much completely out of the question.

Still, it's all progress, of a sort and he is beginning to understand about the days of the week. I guess it's a little much to think that he'll suddenly grasp the intricacies of the past and future but at least in that future I won't be dressing him before he goes out on dates. Hopefully.
Blurted by Sparx 11 comments:

OK, this is a major rant and I actually took it down as being a 'bit heavy' for my blog... however Metropolitan Mum has asked about it so I'm putting it back up... but with this warning that my husband, the lovely Frog (the other lovely Frog) thinks that it represents the rantings of a mad woman... you have been warned.

The lovely Frog, from Frog in the Field has offered me this unrivalled opportunity to rant. Actually what she's really offered me is blog material which is thin on the ground these days. It's a tag in which one is asked to list thinks that, essentially, make one very cross.

The problem here is going to be limiting the scope of this, I suspect; as although I am a person who is easily amused and has quite a high tolerance for crap and rubbish, I have a bottomless pit of judgement lurking in the centre of my soul.

But, that's not what life is about is it? (Except the 'staying home with one's family' bit). Life is about getting on, getting by and trying to wring whatever little bit of pleasure one can from the whole sordid mess and you know what? There's a lot of pleasure to be had out there. There is joy to be found pretty much anywhere. People want to know the meaning of life and that's pretty much it; life means living. Living means staying alive. Staying alive means eating and drinking and staying safe and unless we can enjoy those things, we won't do them very well and that will be the end of us. So I think we should all do as much as we can to try to find enjoyment in everything we do, do it better, stay happy and stay alive.

I actually thought I was going to rant about the election. Apparently not.

Thanks Frog! I'd like to pass this on to a few choice bloggers but it's late, I'm going to bed and I'm not going to tell them quite yet. Just so you know though, I'm tagging: Glowstars, Methusula Mum, Pengelly Pastimes Iota and More Than Just a Mother.

Rant on!
Blurted by Sparx 9 comments: 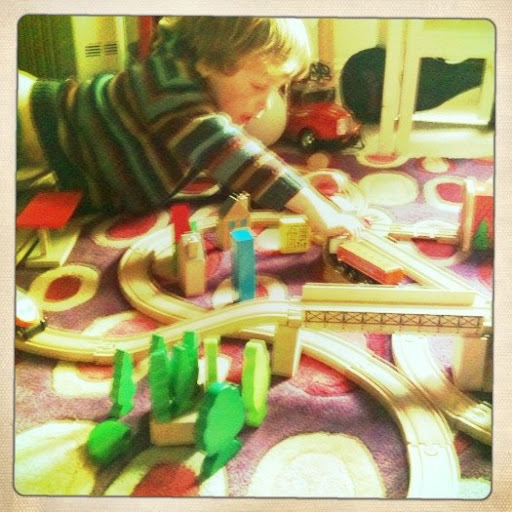